In a conversation with Bree Sproule and Nicole Musey, you need quick eyes to keep up.

Sproule and Musey, recent graduates of Gallaudet University and employees at Saskatchewan Deaf and Hard of Hearing Services, say learning the language allowed them to freely communicate in a way that’s all their own.

“English follows auditory grammar rules,” Musey signed through an interpreter. “ASL isn’t like that. It’s a 3D gestural language that is really rich in facial expression and has all kinds of parts — it has body language and emotion.”

Advocates say unequal access to ASL in Saskatchewan is fuelling a “crisis” for deaf and hard of hearing children.

“Signed English has no emotions with it”

Many school divisions in the province, including Saskatoon Public Schools, do not offer ASL. Instead, students are enrolled in oral programs or taught signed English.

Signed English is not a language — it’s a way of translating English words into hand signs. It doesn’t have its own grammar and isn’t typically used by deaf people to communicate.

“Signed English has no emotions with it.” 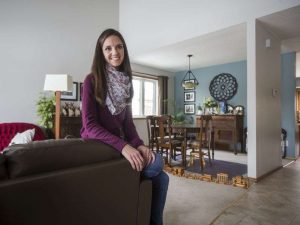 Van Ee moved her child to the Catholic system in Saskatoon, which offers a small bilingual and bicultural program at St. Phillip School.

She is not Catholic and believes the language should be offered everywhere, she said.

For children who cannot acquire hearing, language learning is critical. Sproule said permanent developmental effects can result if a child does not learn a language by age five.

A 2016 report from the Saskatchewan Human Rights Commission found some parents in the province had been discouraged from letting their children learn ASL and that most educational assistants in the province had “virtually no” familiarity with sign language, even when working with deaf or hard of hearing children.

It found some school boards focused on a medical approach with treatments like cochlear implants, but that this was not sufficient for children who could not acquire hearing.

That report also noted “the detrimental effects of this deprivation, describing children who were socially and educationally isolated and who developed behavior (sic) problems due to frustration over inability to communicate.”

The commission formed an advisory committee, including a liaison with the ministry of education, to implement its recommendations.

Postmedia tried to contact that liaison through the human rights commission, but did not receive a response by press time.

In a prepared statement, Ministry of Education spokesman Chris Hodges wrote that the ministry “will continue to work with a provincial advisory committee on the recommendations relating to education that have been brought forward.”

Nairn Gillies, executive director of Saskatchewan Deaf and Hard of Hearing Services, says the government understands the problem and is engaging with the communities in a way previous governments have not.

“Change in government is brutally slow — it’s frustrating,” Gillies said. “But when the ministers themselves have set up meetings with people in the deaf community to ask how to make improvements, that is significant.”