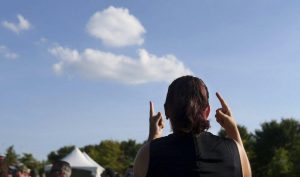 LOUISVILLE, Ky. (AP) — Wearing sunglasses, tattoos and a tank top, Blake Noland bounced his head to the beat in front of the stage at Louisville’s Waterfront Park, raising a beer as the band launched into a guitar solo.

Deaf since birth, Noland couldn’t hear a thing. At least not with his ears.

But he felt vibrations and a beat in his chest, and he watched a sign language interpreter in a black miniskirt dance to the song’s rhythm, her hands signing lyrics and instrument changes, her face channeling the song’s shifting mood of resolve, heartbreak and swagger.

“People will say, why do deaf people go to concerts?” Noland said using sign language. “Now that we have better access interpreters, I can see the music.”

That access will be on display at this weekend’s July 12-14 Forecastle Festival, one of many music festivals and concerts where the increasingly common sight of American Sign Language interpreters is drawing a new contingent of deaf and hard-of-hearing music fans.

While the Americans with Disabilities Act of 1990 required venues to provide interpreters if requested, advocates say venues have increasingly embraced interpreters in recent years.

“Music can be a part of everyone’s life, you just have to figure out how to do it,” said Virginia Moore, executive director for the Kentucky Commission on the Deaf and Hard of Hearing.

Public awareness began to grow in 2013 after a viral video of Amber Galloway Gallego — whose company works at the Forecastle Festival — signing and dancing to rapper Kendrick Lamar’s performance of A$AP Rocky’s “F—– Problems” at Lollapalooza.

She was invited to appear on Jimmy Kimmel Live!, where she held an ASL rap battle with other interpreters, which in turn led to a string of news stories. The YouTube video has been viewed more than 1.5 million times.

“I remember just being awestruck at the performance that she was putting on,” said Jeff Cuellar, vice president of strategic partnerships for AC Entertainment, which puts on both the Forecastle and Bonnaroo music festivals.

This year Forecastle will have two interpreters working the main stages and will accept requests by deaf patrons for them to appear at smaller stages. Forecastle began automatically using interpreters about six years ago, and since then, “A lot more promoters and producers are paying more attention,” Cuellar said.

And so are bands. In 2017, Chance the Rapper announced that he was hiring a team of ASL interpreters for a tour.

As compelling as they are to watch — even for hearing concertgoers — ASL interpreters are sensitive to stealing the show or the focus away from deaf and hard-of-hearing patrons.

Yet patrons like Noland say the skill of a good music interpreter is critical and can make or break their experience. “It’s huge,” said Nelson, who has been to Forecastle several times.

It’s also a difficult and demanding niche that requires far more than most sign-language interpreting.

“When you see an interpreter on a newscast, they’re interpreting speaking,” said Rachel Morgan, who has translated for performers from metal bands to barbershop quartets. “But with music, I’m dancing, mimicking the artist, my signing stays within the rhythm. The flow has to match the flow of the artist. I show them the beat and tempo of the music. Some do air instruments.

“If it’s a sensual song, I’ll move my body in a sensual manner. If a rocker song, I’ll be rocking out. I take on the character of the performer.”

That means “a lot of homework” before the show, said Jessica Minges, who has interpreted at Bonnaroo, the New Orleans Jazz & Heritage Festival and has worked alongside the likes of George Jones, Tom Petty, Phish and Forecastle headliner The Avett Brothers.

Weeks or months ahead of a festival like Forecastle, they study up on set lists (not always provided), analyze lyrics, watch performances, and weigh how to convey complex concepts and intent. “Songs are like poetry and have different meanings than maybe the words say,” Minges said.

Hip-hop’s fast pace, rife with slang, double meanings, idiomatic expressions and plays on words — or made-up words — can be the most challenging. Minges said interpreting for the comedy rap group The Lonely Island at Bonnaroo recently wasn’t easy either.

“Jack White was really a challenge. He doesn’t follow a set list at all. We had no idea what songs were going to come out. We ended up having to memorize 30 songs,” Galloway Gallego said.

The best outcome isn’t a viral video but when a patron comes up and says, “I forgot I was even deaf because this made me feel such a part of everything. … I was so connected to the music,” Galloway Gallego said.

Bryant “BK” Frazier, a UPS Worldport worker who was born deaf, said several years back, a hearing friend told him about how much fun Forecastle was, and he decided to check it out.

Like the Grateful Dead following of deaf fans who used balloons to capture vibrations near concert speakers, he could feel vibrations. But interpreters meant he could better appreciate the music. Coupled with the social and celebratory feel of a festival, he was sold.

“Back in the day, there weren’t interpreters at concerts,” he said. “We loved it, the music, the vibes, people, we had a great time. So it became our new thing to do.”

Impairment among the deaf and hard of hearing varies widely. Advances in hearing aids and cochlear implants mean some hear partly at loud concerts, with interpreters filing in the blanks.

Traci Hardy, 44, was born deaf and got her first hearing aids at 11 months. Tom Petty in St. Louis around 1999 marked her first interpreted concert, and she’s since enjoyed artists from Carrie Underwood to Van Halen, she said in an email.

“At the Yum Center, I have a contact I can email when I want tickets in the designated interpreted section. They have been great about providing ASL interpreters,” she said. “I can enjoy music with my hearing aids. I definitely enjoy the vibrations and sounds. It is difficult for me to follow the words if I am not familiar with the song, I would need to have the song memorized in order to understand the words. This is where an ASL interpreter helps at concerts.”

Moore said interpreters at concerts are one sign of progress and tie into the work of Kentucky’s DeaFestival, which brings in deaf singers and musicians to connect the deaf and music.

But she said more access is needed. Too many venues still don’t automatically provide them. Galloway Gallego said she wants more bands to require them in their “riders,” or performance contracts.

“A person in a wheelchair doesn’t have to say, ‘Hey, don’t forget to set up the ramp’ before coming to a public event,” Morgan said. “In a perfect world, you could just go (to a concert). We’re still working on getting more accessibility.”