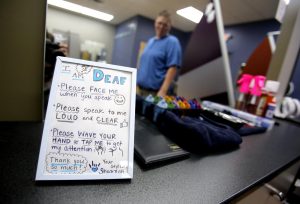 When Shannon Smith has a client in her chair at Great Clips, she makes sure she walks around to face them directly so she can read their lips or sign to the client.

A hair stylist, Smith is deaf and she cuts hair for both hearing and non-hearing people.

Clients who might have trouble communicating with other hair stylists can sign with Smith and know 100 percent they’ll get what they want.  She said she has had deaf clients come in specifically asking for her.

“They really appreciate that,” Smith said of her ability to sign and communicate.

Smith said she grew up cutting her nephew’s and other family member’s hair, but it took her 15 years to find her way to her current passion.

Originally from Charlotte, Smith graduated from the North Carolina School for the Deaf in Morganton. Over the next decade and a half, she spent time working different jobs and moving around before settling down in Shelby.

“I got tired of not having goals and not doing anything with my life,” Smith said through Brittany Burnett, an interpreter with Clarity Language Access, an interpreting agency in Shelby.  Smith also wanted to give back and meet needs in the community.

Eventually, she decided to go back to school and in 2018, she earned her cosmetology degree from Cleveland Community College.

“I was the first person in my family to graduate high school and college,” Smith said.  She started out working at Smart Styles in Walmart and then moved to Great Clips.  “I love it,” she said.

She said she loves the visual and hands-on aspects of her job, the opportunity to attend hair shows around the state and nation, and the constant process of learning and staying up to date on current trends. She loves cutting hair and especially loves doing fades.

Kyle Kiser, who owns Clarity Language Access, said Smith has worked hard to get where she’s at today.

“She also wanted to prove to other Deaf/Hard-of-Hearing people in the community that they can do anything,” Kiser wrote in an email to The Star.

Kiser said Smith and another CCC cosmetology graduate also provided their services during prom night at Morganton’s School for the Deaf.

“When they arrived, many of the students’ eyes lit up and were surprised to see someone who knew American Sign Language, deaf, and working as a hair stylist and skin care specialists providing services to them,” Kiser wrote. “They didn’t only provide the service to those kids, but also a role model image by showing them that they can be anything they wish to be in the workforce and don’t allow deafness to stop them.”

Kiser said he has known Smith for about four years and when he learned she wanted to go back to school but didn’t know how she would afford it, the agency was able to give her a scholarship to help with some of her school expenses.

“Since then, I’ve seen her become a great role model,” Kiser said. “Our community is a small one, but we all as a Deaf/Hard of Hearing community get so excited when one succeeds their goals and dreams.”

Smith said it can be challenging for the deaf/hard of hearing to find good jobs because of discrimination and lack of access to interpreters or other accommodations.

“Everyone should be treated equally, no matter their hearing status,” she said.

Smith said Great Clips has been working with her to ensure she has what she needs to succeed as an employee.

“Amazing teamwork for sure,” she said. “Equal access all the way.”  Smith wants people to know one thing.

“Deaf people and hearing people are the same,” Smith said. “The only different is deaf people can’t hear. We speak with our hands, we speak visually.”