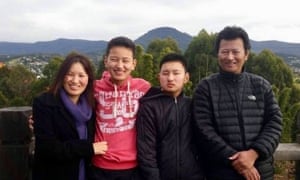 Jangchu Pelden is unable to hold back the tears.  Just over 24 hours ago she found out her family, from Bhutan, had been granted permanent residency in Australia after a lengthy legal battle.

“I’m still in shock,” Pelden tells Guardian Australia on Sunday morning from her home in Queanbeyan, New South Wales.  “We are just all so happy, and so happy to be out of this stress.”  She pauses, takes a deep breath and tries not to cry. “I’m sorry,” she says. “I still can’t believe it.”

Pelden and her husband, Tshering, and their sons Kinley Wangchuck, 18, and Tenzin, 17, were facing imminent deportation because of Kinley’s health issues. On Friday night they were given a last-minute reprieve by the immigration minister, David Coleman, who granted the family permanent residency.

The family have lived and worked in Australia since 2012, with Pelden studying and working in childcare and helping Kinley, who is deaf, to learn sign language and to receive care for his leaning difficulties. Tshering works in aged care and as a cleaner.

In March the administrative appeals tribunal upheld a decision not to give the family permanent residency visas, after hearing Kinley’s condition was likely permanent and would probably require both state and commonwealth disability services.

The department of home affairs stipulates that to meet the health requirement for permanent residency, applicants must be free from any disease or condition that is a significant healthcare and community service cost to the Australian community.  The family’s visa expired in April and they were facing imminent deportation. They first applied for permanent residency in 2015.

Pelden says she received an email from immigration on Friday saying the family had been granted permanent residency, but she did not see it until late on Friday night. She tried to call her migration agent to confirm it was true; being late, he did not answer the phone.

“My husband and I did not sleep at all Friday night,” she says. “We thought it might be a scam. And finally on Saturday morning we tried the agent again and he confirmed it was all real. We are just so happy, my sons are so happy.”

It follows a change.org petition calling for Coleman to allow the family to stay. It was started by a retired teacher for the deaf, David Randall, who taught Kinley. The petition said: “It was only when Kinley arrived in Australia that his hearing loss was accurately diagnosed and hearing aids provided for him.