On a Lufthansa flight between New York, JFK and Frankfurt Airport, the crew aboard the Lufthansa jet went the extra mile to make sure that a deaf passenger felt included.

Stockholm based writer/producer, Antonia Rodrigues da Silva was travelling to Germany from New York last month and decided to take to social media to thank the Lufthansa crew for making her feel so welcome.

Being hard of hearing is particularly difficult when flying and involves writing questions and answers down on paper when having to communicate with people who don’t know sign language. 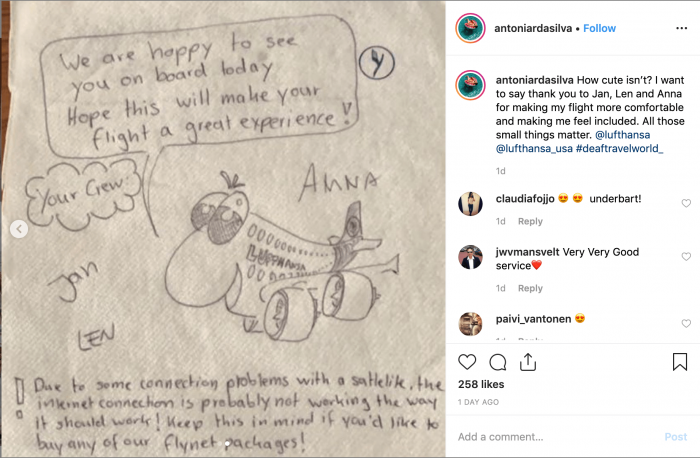 Knowing that Antonia would have difficulty in understanding in-flight messages, the crew took the time to write and illustrate details of the transatlantic flight on napkins.

On her Instagram account, Antonia posted photos of the napkins and even made a short video to express her feelings, saying: “I want to say thank you to Jan, Len, and Anna for making my flight more comfortable and making me feel included. All those small things matter.”

he also posted on Facebook as well, writing: “I want to say thank you for making my flight more comfortable and making me feel included … Like knowing that WiFi doesn’t work, what are we are going to eat or if we will arrive on time … All those small things matter”.

Unless you are hearing impaired, it is almost impossible to imagine what flying is like when you are unable to hear airport announcements.