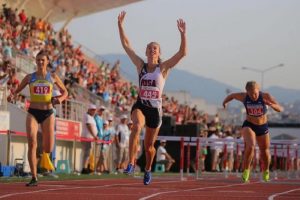 “Equal pay! Equal pay!” was chanted by the fans in the USA and Netherlands seat sections at the 2019 FIFA Women’s World Cup. The sound of this chant went global.

On Jan. 19, 2017, Maryland Del. Mary Ann Lisanti testified before the Ways and Means Committee about her sponsored bill, HB003/2017, that would exempt from the state and local income tax the value of specified medals and prize money or honoraria received by an individual who competes in the Olympic Games or the Paralympic Games. I, as a former Deaflympian, urged the committee to include the Deaflympics.

Del. Lisanti made a quick amendment to her bill by adding the Deaflympics and Special Olympics. Gov. Larry Hogan quickly signed it to law, Chapter 501 of the Acts of 2017. No media, including USOC, picked up this important news.

Engineered by Dr. Donalda K. Ammons, an alumna of the Maryland School for the Deaf who was the ICSD president, the name of this event was changed to the Deaflympics in 2001 with the approval of the International Olympic Committee.

The Maryland School for the Deaf is proud to have about 55 alumni who have participated. More and more Marylanders from other schools had competed.

One of them is Rebecca “Becca” Meyers of Timonium. In the 2009 Deaflympics in Taipei, Taiwan, Becca was only 15 and swam in eight different events. She got a bronze in a relay event. Two years later, Becca was chosen as the 2011 Female Sportsperson of the Year by the USA Deaf Sports Federation for winning six medals – including four golds – at the 2011 World Deaf Swimming Championship in Portugal.

Since she has a second disability condition Usher syndrome, Becca participated in the 2012 and 2016 Paralympics and collected three gold medals, two silvers and one bronze. Then she won the Best Female Athlete with a Disability ESPY Award twice (2015 and 2017) and received the Trischa L. Zorn Award from USA Swimming twice.

Did she participate in the Deaflympics in 2013 in Sofia, Bulgaria, and 2017 in Samsun, Turkey?

Becca kindly denied the USA Deaf Sports Federation invitation. No surprise to me and most die-hard Deaflympians. The simple reason is that the USADSF has not received the development fund from the U.S. Olympic Committee since 2003, when the USOC had complied with the Olympic and Amateur Sports Act Amendments of 1998, which includes the Paralympic Games and amateur athletes with disabilities within the scope of the act and the U.S. Olympic Committee, by establishing the Paralympics Division in 2003.

Back to April 28, 1979, the USOC had its 1979 annual House of Delegates meeting in Colorado Springs and had as a main speaker Sen. Ted Stevens of Alaska, sponsor of the Amateur Sports Act of 1978. He said to 2,000 delegates:

We are happy for her and her two Maryland swimming Paralympian Jessica Long of Baltimore (with 23 Paralympic medals) and McKenzie Coan of Loyola University of Maryland (with four Paralympic medals), but what about the Marylanders who are deaf and hard of hearing?

Since 1979, the USADSF is a member of the USOPC as a community-based multisport organization. However, for many years, the former was instructed by the latter to contact Congress to consider the inclusion into the USOPC program.

To Maryland legislators, some of you have known me since I testified before you on a child support issue and a redistricting issue, but I need your help to end my 43-year battle for the parity with USOPC by introducing a joint resolution to ask the U.S. Congress to add the Deaflympics to the USOPC program.

Quick fact: To qualify for the Deaflympics, “athletes must have a hearing loss of at least 55db in their ‘better ear.’ Hearing aids, cochlear implants, and the like are not allowed to be used in competition, to place all athletes on the same level.”

In the Olympics, there is no restriction on hearing loss or use of hearing aids. At least 17 athletes are in both Olympics and Deaflympics. One of them is Becca’s idol and hero, swimmer Terence Parkin of South Africa.

I believe that the parity with the United States Olympic & Paralympic Committee could motivate future athletes who are deaf and hard of hearing.