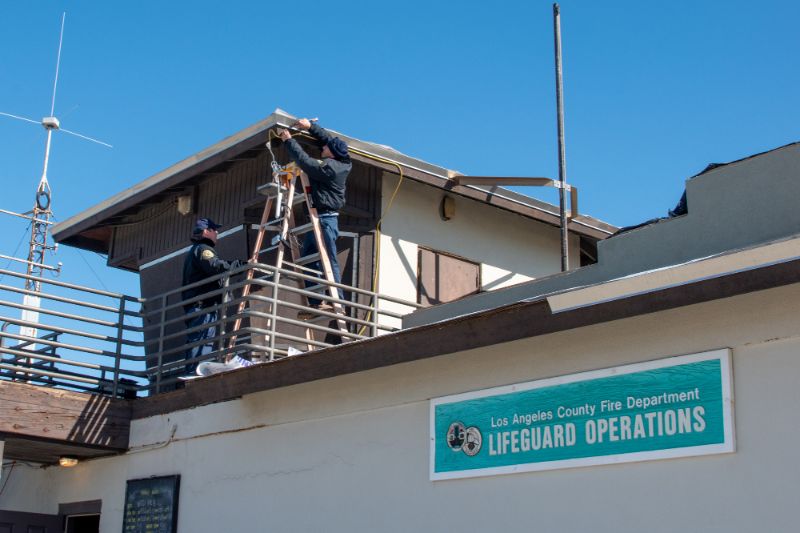 Torrance Beach will become the first beach in California, much less the world, to have signals set up to warn deaf and hard-of-hearing beachgoers of emergencies, through a pilot program announced at Tuesday evening’s Torrance City Council meeting.

The Beach Emergency Evacuation Lighting System — or BEELS — will install a series of LED lights, visible at a distance of a quarter-mile, on three Torrance Beach-area buildings for hard-of-hearing beachgoers, alongside a series of sirens to broadcast alerts for hearing beachgoers.

The program is the brainchild of LA County Department of Beaches and Harbors Safety Officer Randy Dean, the parent of two hard-of-hearing children.

As his children went out into the world and into other communities for the deaf, Dean realized local beaches don’t have systems in place to ensure safety for those populations. A survey, released to the hard-of-hearing community, confirmed his suspicion.

“They don’t often come, because in an emergency, they won’t know what’s going on — they’ll be confused, and at a disadvantage,” Dean said.

To date, LA County Beaches don’t have an evacuation protocol in place for deaf and hard-of-hearing beachgoers. In case of evacuations — during earthquakes, tsunamis, predator sightings or lightning strikes — lifeguards call out audible evacuation orders.

“So we needed to go with something that got their attention and is really able to connect with them,” Dean said.

Dean took inspiration from a common alert system used for the hard-of-hearing community: flashing lights. Dean referred to doorbells within deaf homes that flash bright lights in place of a ring tone. For a more handy example, smartphones accessibility settings can flash an LED when phone calls or messages come through to soundlessly alert users.

The LED systems that will be installed are similar.

A total of 25 weather-resistant LED light will be installed on three buildings on Torrance Beach, alongside the siren system and a series of signs informing beachgoers of the multi-faceted warning system.

The installation will total approximately $100,000, including one-time costs for the operating system. Should the pilot project be successful, the program will be expanded to beaches across the County, including the County-run facilities of the Beach Cities.

“We’re always looking for ways to make our beaches more accessible,” said Nicole Mooradian, a Public Information Officer for the Department of Beaches and Harbors. “Access for all is our mission, and the beach is for everyone.”

The BEELS program is slated for final approval by the County Board of Supervisors at its August meeting, and is projected to be in place by September.