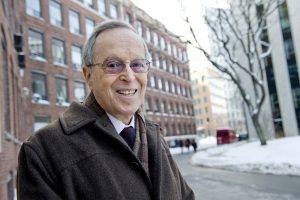 Harlan Lane, who helped establish the American Sign Language Program at Northeastern, will be remembered for being a tireless champion and advocate for the Deaf community. He died on July 13, at 82 years old.

Lane, Matthews Distinguished Professor of Psychology at Northeastern, studied the language and culture of the Deaf community. He wrote numerous books on the subject, most recently The People of the Eye: Deaf Ethnicity and Ancestry, in which he made the case that sign-language users have many of the characteristics of a distinct ethnic group.

Deafness is not a disability, he argued in the book, but rather its own community as much as any other ethnic community.

In an interview with The Boston Globe shortly after his book was published, Lane said, “One disability scholar says that deaf people reject the idea that they have a disability because there’s a stigma associated with disability and deaf people are trying to duck the stigma. In my view, that simply fails to understand the deaf world. It’s a positive value being deaf.”

Though he was not physically deaf, Lane developed an interest in Deaf culture in the 1970s. He was a visiting professor at the University of California, San Diego, at the time, and had a chance encounter with Deaf students who were signing to each other.

“I became quite excited because I realized there was a whole new way to look at the psychology of language. I felt like Balboa discovering the Pacific,” Lane said in an interview with News@Northeastern in 2011.

He held a faculty position at Gallaudet University in Washington, D.C., from 1987-88, and was an outspoken member of the “Deaf President Now” movement at the institution—a campaign to ensure the nation’s only college exclusively for the Deaf hired a president who was deaf or hard of hearing.

The Gallaudet Board of Trustees chose Elisabeth Zinser as the college’s seventh president. Zinser was neither deaf nor hard of hearing, and was chosen over two candidates who were both deaf. On March 8, 1988, at the height of the “Deaf President Now” movement, Lane was quoted in The New York Times, saying that the other two candidates were “very qualified deaf applicants.”

Four months later, he told a reporter for The Christian Science Monitor, “The deaf have always taken the position that their own minority language is essential to their identity and the only way to educate deaf children.”

The campaign was successful. Zinser was president for three days before she resigned and I. King Jordan, one of the two deaf candidates, was chosen to replace her.

Lane received a number of awards for his scholarship. In 1991, he received a prestigious MacArthur Fellowship for his research on the distinctive language and culture of the Deaf community. In 2014, he was named Commandeur de l’Ordre des Palmes Académiques, the highest academic honor given by the French Republic.