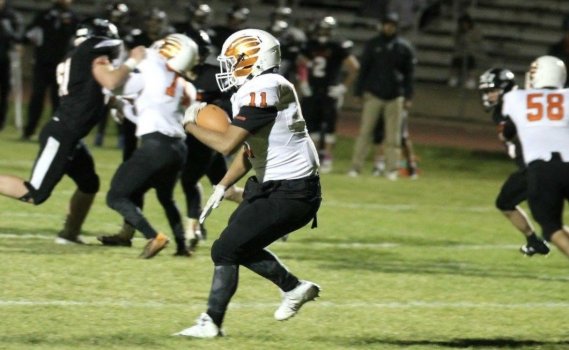 FREMONT — Three years after a sensational performance on national television, California School for the Deaf-Fremont running back Calel Aramboles has his eye on the goal line again. Brace yourselves, opposing defensive backs.

The Eagles senior will enter the 2019 season as a robust team leader who squats over 600 pounds, runs the 40 in 4.6 seconds, and is on the Division I college radar. Back in 2016, the then-freshman ran for 143 yards and two touchdowns in a 43-0 win over Woodland Christian, with ESPN’s E:60 in town.

“The ESPN2 game was a great experience, I had so much fun that day,” Aramboles recalled in an interview via text message. “… The team we had that year was great, and the exposure for the deaf community was awesome.”

“He is a hard worker everywhere, a gym rat, and someone who has always had bigtime football aspirations ever since I met him six years ago,” CSD coach Warren Keller shared via email. “We are looking to have a solid team this fall and will be counting on him and the senior leaders to bring us more bigtime football here.”

Aramboles, who carries a 3.8 grade-point average and a humble nature, has been recruited by UC Davis, Cal, San Jose State and Nevada. He describes visiting campuses during the recruiting process as “fun” and “awesome.”

“To be honest, the coolest part so far is being able to take pictures in the team uniforms, giving me a sense of belonging,” Aramboles, who also plays free safety, shared via text.

“We’re rooting on him to represent the deaf community down the road,” Keller assures.

Aramboles, a native of the Bronx in New York City, played injured in 2018 but has been training hard to have a “healthy year,” Keller assures. Even with his physical pain last season, the Eagles’ home run hitter amassed 1,265 yards rushing and 18 touchdowns in eight games. This after he ran for 1,528 yards and 16 touchdowns as a sophomore.

“Last season wasn’t easy for me,” he shared. “The injuries to my ankles and shoulder weren’t my best moments. Hence the reason I became a gym rat as well as starting a new diet. ‘Healthy’ has become my number one focus for me and my coaches.

“Mario is my defensive coach as well as my strength coach,” Aramboles shared. “His dedication to the game and fitness is beyond me. Coach Keller’s knowledge of the game is what impacted me the most; the film study we do before and after games are a great learning tool for me and the team.”

He has long carried a love of sports and received support from his parents, Crizelda and Juan.

“I love working hard. Being in the gym makes me happy,” Aramboles shares. “I have been playing sports since I was 5, so sports have always been a big part of my life. My parents made sure I was involved in different kinds of activities and never let my deafness to be looked at as a ‘limitation.’”

Of his motivation and drive, Aramboles leans on his dream.

“Ultimately, it’s my love of football in hopes that I would have the opportunity to play in the NFL one day, is one of the things that keeps me working hard.”