Frustrated at the lack of complex scientific terms in British Sign Language, a Dundee student has created more than 100 new signs to help deaf people express themselves when talking about science.

For any new student, coming into a lecture theatre or a laboratory can be nerve-wracking – especially if you can’t hear.

That was the reality Liam Mcmulkin faced when he began studying life sciences at the University of Dundee in 2015.

Born deaf, Liam was the first person in his family to go to university, after receiving an undergraduate scholarship from The Robertson Trust.

He admitted having fears about what life as a student would be like, particularly when it came to lectures:

“When I applied to university, I was worried about two things,” he told BBC Scotland’s The Nine.

“Firstly, I was at school with 10 other deaf people but now at university, I was the only deaf person. How could I communicate?

“Secondly, English at university is at a higher level, would I be able to cope?

“I thought I would just apply anyway.” 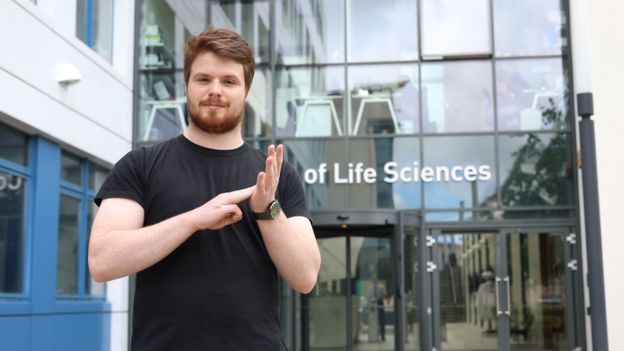 Frustrated at the lack of complex scientific terms in British Sign Language (BSL) during classes, Liam decided to take matters into his own hands.

“Watching the interpreters for a one hour lecture is very tiring,” he said.

“Sometimes the interpreter would be finger spelling for ages and I was having to watch it.

Liam began his project, with funding from the BSDB Gurdon Summer Studentship and The Robertson Trust.

Within two months he had invented over one hundred new signs, which are now recognised by British Sign Language and used across the country. 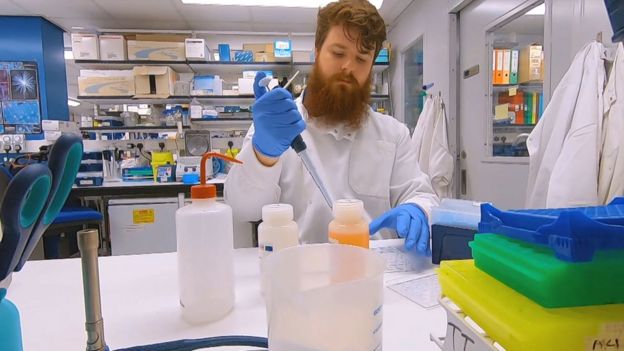 Asked how he came up with his own signs, Liam said: “You have to think about the meaning of the word.

“It’s definitely much easier because there is less finger spelling.

“It is easier for the interpreter as well as for me. So, maybe when I meet other deaf scientists we will have the signs to communicate rather than finger spelling, because I don’t want that.”

Liam starts a master’s degree in September and in future, hopes to become a researcher.

He plans on building his library of signs to make science accessible to everyone.

“I feel really happy because I know from my own experience how difficult it is to learn during my lectures,” he said.

“Now the new signs have spread, I feel it will be much better for future students.

“I feel happy and proud.”